History of the Flag

History of the Flag

The United States flag is the third oldest of the national standards of the world -older than the Union Jack of Britain or the Tricolor of France.

The flag was first authorized by the Second Continental Congress in Philadelphia on June 14, 1777. This date is now observed as “Flag Day” throughout America.

The flag was first flown from Fort Stanwix, on the site of the present city of Rome, New York, on August 3, 1777. It was first under fire three days later in the battle of Oriskany, August 6, 1777.

It was first decreed that there should be a star and a stripe for each state, making thirteen of both; for the states at that time had just been erected from the original thirteen colonies.

The colors of the flag may be thus explained -the red is for valor, zeal and fervency; the white for hope, purity, cleanliness of life, and rectitude of conduct; the blue, the color of heaven, for reverence to God, loyalty, sincerity, justice and truth.

The star (an ancient symbol of India, Persia and Egypt) symbolizes dominion and sovereignty, as well as lofty aspiration. The constellation of the stars within the union, one star for each state ‘ is emblematic of our federal constitution which reserves to the states, their individual sovereignty except as to the rights delegated by them to the federal government.

The symbolism of the flag was thus interpreted by Washington: “We take the stars from heaven, the red from our mother country, separating it by the white stripes, thus showing that we have separated from her, and the white stripes shall go down to posterity representing liberty.” 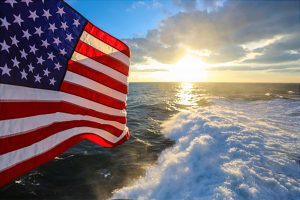 In 1795 after Vermont and Kentucky were admitted to the Union, the number of stars and stripes was increased to fifteen. As other states came into the Union it became evident there would be too many stripes. In 1818 Congress enacted that the number of stripes be reduced and restricted henceforth to thirteen, representing the thirteen original states; while a star should be added for each succeeding state. That law is the law of today.

The name “Old Glory” was given to our national flag on August 10, 1831, by William Driver, a sea captain of Salem, Massachusetts. One legend has it that when he raised the flag on his brig, the Charles Doggett, he said: “I name thee Old Glory.”

The flag was first carried in the battle of Brandywine, September 11, 1777. It first flew over foreign territory January 28, 1778, at Nassau, Bahama Islands; Fort Nassau having been captured by the Americans in the course of the war for independence. The first foreign salute to the flag was rendered by the French Admiral LaMotte Piguet, off Quiberon Bay, February 13, 1778.

The United States flag is unique in the deep and noble significance of its message to the entire world – a message of national independence, of individual liberty, of idealism, of patriotism.

It symbolizes national independence and popular sovereignty. It is not the flag of a reigning family or royal house, but of nearly three hundred million free people welded into a nation, one and inseparable, united not only by community of interest but by vital unity of sentiment and purpose; a nation distinguished for the clear, individual conception of its citizens alike, of their duties and their privileges, their obligations and their rights.

It incarnates for all mankind the spirit of liberty and the glorious ideal of human freedom – not the freedom of unrestraint or the liberty of license – but an unique ideal of equal opportunity for life, liberty and the pursuit of happiness, safe-guarded by the stern and lofty principle of duty, of righteousness and of justice, and attainable by obedience to self-imposed laws.

Floating from the lofty pinnacle of American idealism, it is a beacon of enduring hope to the oppressed of all lands. It floats over a wondrous assemblage of people from every racial stock of the earth whose united hearts constitute an indivisible and invincible force for the defense and succor of the downtrodden.

It embodies the essence of patriotism. Its spirit is the spirit of the American nation. Its history is the history of the American people. Emblazoned upon its folds in letters of living light are the names and fame of our heroic dead, the fathers of the republic who offered upon its altars their lives, their fortunes and their sacred honor. Tales of national honor and glory cluster thickly about it. Ever victorious it has emerged triumphant from many great national conflicts. It flew at Saratoga, at Yorktown, at Gettysburg, at Manila Bay, at Chateau-Thierry, at Iwo Jima, Normandy Beaches, Inchon Landing and many others. It bears witness to the immense expansion of our national boundaries, the development of our national resources, and the splendid structure of our civilization. It prophesies the triumph of popular government, of civic and religious liberty and of national righteousness throughout the world.